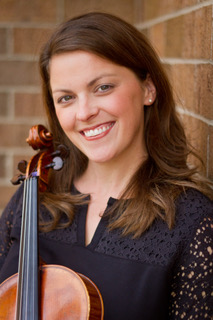 Rebecca Swan (BM The Juilliard School ’04) is a graduate of the Juilliard School, where she studied with Heidi Castleman and Misha Amory. A native of the Chicago area, Rebecca recently moved back after several years in Charlotte, NC, where she played Principal Viola for Charlotte’s Broadway Series and subbed regularly with the Charlotte Symphony. She has studied under Itzhak Perlman, Peter Slowik, Toby Appel, and James Dunham, as well as members of the Juilliard and Brentano Quartets. Before her time in Charlotte, Rebecca played with Iris Chamber Orchestra under Michael Stern, New World Symphony with Michael Tilson Thomas, and The Orquesta Sinfonia Nacional de Costa Rica in San Jose, Costa Rica. She was the youngest member ever to be accepted into the Civic Orchestra of Chicago under Daniel Barenboim when she was 16. Some of her favorite freelance opportunities have been playing in the orchestra for Josh Groban, Stevie Wonder, and Andrea Bocelli. Rebecca currently is a member of the Elgin Symphony and is Principal Violist with the Rockford Symphony. This year she has played with Lyric Opera of Chicago, Chicago Philharmonic, Chicago Jazz Philharmonic, and has served as guest principal of the Illinois Philharmonic Orchestra.