Tax included (if purchased within the USA). This is the digital download edition. Click here for the physical double disc digipak edition.

“We love this new recording of Vivaldi’s Four Seasons concerti so much, we’ve featured all the tracks at least twice on the air! … This recording is a perfect blend of music and the spoken word … With the voice of Steve Robinson … musically anchored by one of our country’s greatest chamber groups, Drostan Hall’s Camerata Chicago and beautifully laced with the exquisite brilliance of the talented young violinist Amelia Piscitelli. I wholeheartedly recommend this two CD set for everyone’s classical music library.”

“For children and adults alike, this recording is a wonderful exploration into Vivaldi’s Four Seasons. The performance is first class from young violinist, Amelia Piscitelli and Camerata Chicago, led by Drostan Hall, while the narrative from Steve Robinson is highly informative and expertly delivered. I give this recording my highest recommendation.“

Telling the story within the music! Vivaldi’s Poetry, seasonal elements and characters are presented here with descriptive narratives and musical examples as depicted in the score of this first piece of programmatic music ever written (c. 1720).

Disc 2: Complete recording of the four violin concerti comprising The Four Seasons – Spring, Summer, Autumn and Winter – each of which has three movements. Performed by violinist Amelia Piscitelli. 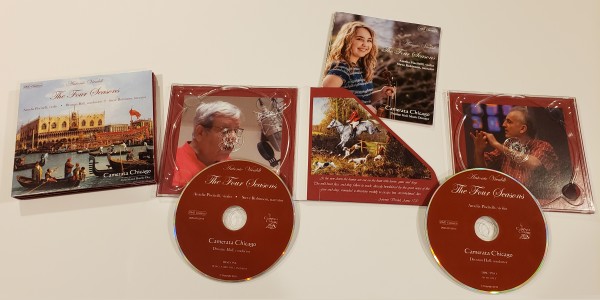