Messiah: The Consequences of an Idea by Handel 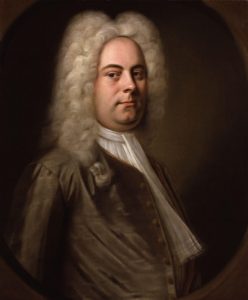 The story of the Messiah by George Frideric Handel is drawn from numerous strands which intertwine together to bring the Word through music to millions every year.

Handel was born in 1685, the same year as Bach. Bach knew of Handel and enjoyed his music. They were born only 80 miles apart, and Bach wanted to meet the man, but never quite achieved that. Bach traveled to Halle, Handel’s home town in Germany, in 1719 on business, but Handel had actually left just the day before.

Handel’s father disliked music and forbade little George from learning but somehow he drank in the wonders of music. His aunt smuggled a silent keyboard into the attic and so he learned in secret. Then on an outing the little seven year old boy went with his father, who was a barber surgeon, to visit a client, the Duke of Prussia. George saw an organ at the Duke’s residence and sat down and played it. The mesmerized Duke insisted that his father give the boy lessons. His life changed forever!

Later, Handel went to Italy where he honed his craft writing Italian Opera and then he moved to London.

How Handel came to write Messiah – an Oratorio

Handel took London by storm in writing and performing Italian operas which were very trendy in early 18th century London. Suddenly the good and the great lost their interest in opera. Too many were being performed by too many theatres and opera houses and Handel’s audiences dwindled.

So he turned to the Oratorio for his musical productions. The Oratorio was invented, if you will, by Philip Neri. In 1556 Neri founded contemporary church services to attract the youth of the day in a building called an Oratory. He founded the order of the Oratorians in Rome. The Oratorio is a musical form setting bible stories and scenes from sacred history to music without any dramatic staging, using an orchestra, choir and soloists.

At the same time Handel’s friend Charles Jennens, a landowner and patron of the arts, wrote a theologically curated collection of Scriptures taken from the The King James Bible and the great Bible from 1539, inviting Handel to compose the music for it. They had already collaborated on an Oratorio called Saul which was very successful, partly because it was written in English.

“Handel says he will do nothing next winter, but I hope I shall persuade him to set another Scripture collection I have made for him, and perform it for his own benefit in Passion Week. I hope he will lay out his whole genius and skill upon it, that the composition may excel all his former compositions, as the subject excels every other subject. The subject is Messiah.” 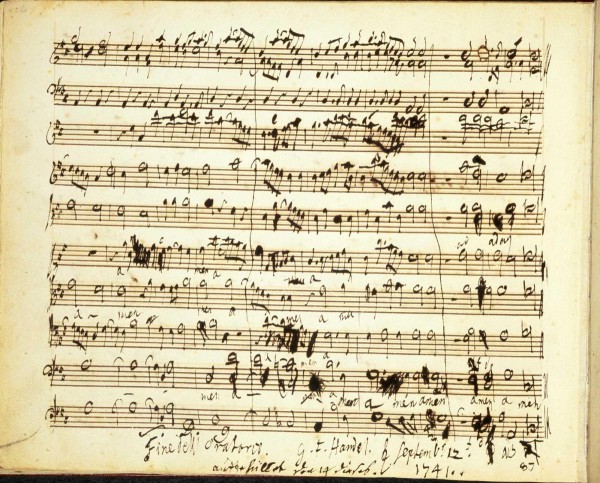 Handel took up the project and wrote at a feverish pace … writing 100 pages (of 260) of it in 6 days and completing the Oratorio in just 24 days …. an extraordinary feat. Handel writing at that pace wasn’t unusual, but he was certainly inspired in his writing of this great Oratorio for while composing in tears he had a vision, saying to his servant “I did think I did see all Heaven before me, and the great God Himself seated on His throne, with His company of Angels”!

The first performance in Ireland in 1742 was a great success, but when he took it to London the following year it was a failure because many people at the time thought it was sacrilegious to have scripture sung in a theatre by music hall singers.

Seven years went by. Then Handel was struck by a groundbreaking idea … holding a benefit performance for the Foundling Hospital, the world’s first ever incorporated charity which was set up by Captain Thomas Coram to take in abandoned children. It had become celebrated by members of high society in London and a tourist attraction but it needed funds for its new chapel.

This idea made history! The Foundling Hospital eagerly allowed Handel to put on a huge performance of the Messiah in 1750 to raise funds, not in a theatre but in the hospital itself. He performed it there every year until he died in 1759. This is why the tradition of holding a performance of Messiah every year began and has been happening all over world for nearly 270 years. 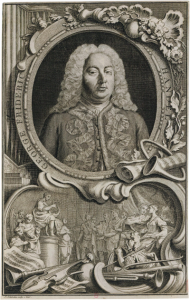 Actually, these concerts started more than one tradition. The other is that the audience stands for the Hallelujah Chorus. King George II was present at one of these Foundling Hospital performances and he stood up during the Hallelujah Chorus. Everyone in the presence of the King also therefore had to stand and so the phenomenon was born. There are various theories as why the King rose to his feet at the point:

1. King George II happened to arrive late immediately before the Hallelujah Chorus. Everyone had to stand.

2. He had fallen asleep in the preceding numbers and stood up in sheer shock at the tumultuous sounds from the orchestra and choir.

3. He was truly moved and excited by the rousing chorus and stood up.

Perhaps it was the power of the verse Handel was using to write the Hallelujah Chorus from the book of Revelation 19:16 “Alleluia: for the Lord God omnipotent reigneth”.

Camerata Chicago will perform the Hallelujah Chorus twice in its performances on December 10 and 11 – the second time inviting the audience to join in for a truly rousing finale to what promises to be a fabulous concert.

The consequences of one idea that Handel had are amazing … he was directly responsible for saving the lives of over 25,000 children, his Oratorio became a sensation, people all over the world perform it every year, and it has become the most celebrated piece of choral music ever written. It has been sung more often and heard by more people than any other single piece of music in the last 300 years. Some wonderful scriptural verses are sung to millions of people annually, and as the librettist Jennens put it “the subject excels every other subject. The subject is Messiah.”