Founded in 2014, the Camerata Chicago Academy is an elite chamber orchestra program comprising advanced students. The Academy provides a marvelous opportunity for young musicians to perform in a professional atmosphere with the Camerata Chicago faculty which manifests the educational spirit of Camerata Chicagoís founder and Music Director Drostan Hall. Maestro Hall has thirty years experience training aspiring young musicians. Many of the Academy’s members plan to study music at university and subsequently go on to have professional careers in music. 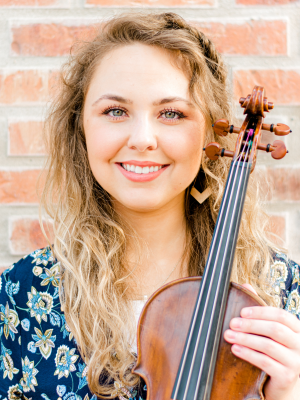 Amelia Piscitelli graduated as Salutatorian from Hammond Baptist High School (Schererville, IN) in May 2019. She is currently enrolled as a Music Performance major at Hyles-Anderson College, a Bible college in Crown Point, IN. Amelia has played violin since 2005 and began to study violin seriously with Stephanie Allen in 2008. From 2009-2014 her violin studies continued with Debbie Edwards (Downers Grove Suzuki Strings) followed by Drostan Hall (Hall School of Music) from 2014 to the present.

She joined Camerata Chicago Academy in 2015 and has been Concertmaster since 2017. In December 2016 she performed live on WFMT’s Introductions (Chicago, IL). Since then her professional experience with Camerata Chicago has also included solo opportunities. Her professional solo debut performing the Svendsen Romance in 2016; performing the Bach Double with Mathias Tacke in 2017; soloist for Vivaldi’s Four Seasons in 2017 and 2018; soloist as part of the Wheaton College Artist Series in 2019. DMD Records recently released her first solo recording in July 2019 of the Vivaldi Four Seasons. She is often requested to participate in vocal groups at FBC Hammond as a violinist and vocalist.