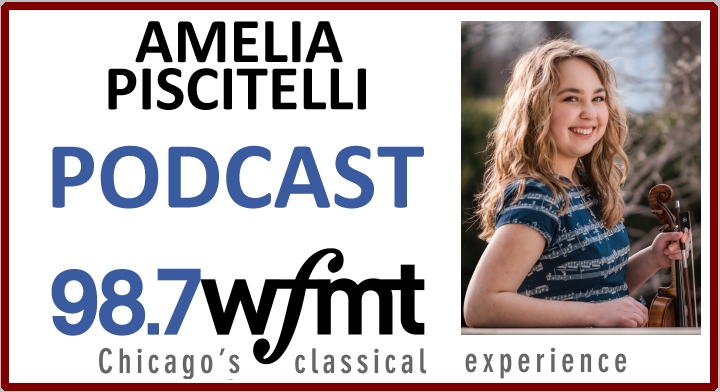 The podcast of the 98.7WFMT Introductions radio show with Amelia Piscitelli, Concertmaster of the Academy Orchestra, is now available. The show was broadcast on Saturday July 18 and  profiled Introductions alum Amelia Piscitelli, currently between her freshman and sophomore years at college. Robbie Ellis presenter and producer looked back at her Introductions recital as a 15-year-old in 2016, as well as her work as concertmaster and soloist with two orchestras under the Camerata Chicago banner.

Amelia Piscitelli graduated as Salutatorian from Hammond Baptist High School in Schererville, Indiana in 2019. She is currently enrolled as a Music Performance major at Hyles-Anderson College, a Bible college in Crown Point, Indiana. Amelia has studied violin with Stephanie Allen and Debbie Edwards, and currently studied with Drostan Hall. She joined the Camerata Chicago Academy in 2015 and has been Concertmaster of the Academy Orchestra since 2017. She appeared live on WFMT’s Introductions in 2016. She has appeared as a soloist with Camerata Chicago on multiple occasions, including performing Vivaldi’s complete Four Seasons and recording them for DMD Records. She has also been Concertmaster of the Camerata Chicago Academy Orchestra since 2017.

Amelia, Camerata Chicago, and the Joffrey Ballet are set to collaborate on another performance of the Four Seasons, with world-premier choreography, as part of the Wheaton College Artist Series in January 2021.