The Academy Spring Concert will take place on May 14 and will feature performances from both the Senior and Junior Academy Orchestras.

You will be delighted by Rossini’s Barber of Seville Overture, the Capuzzi Double Bass Concerto performed by Lawrence Hall and the Danse Macabre by Saint-Saëns.

Enjoy Pachelbel’s Canon and the Arrival of the Queen of Sheba by Handel performed by the Junior Academy. They will also entertain you with the Pavane by Fauré and a Rondeau by Mauret.

The Academy was recently featured on the 98.7 WFMT radio show Introductions.

Founded in 2014, the Camerata Chicago Academy is an elite chamber orchestra program comprising advanced students. The Academy provides a marvelous opportunity for young musicians to perform in a professional atmosphere with the Camerata Chicago faculty which manifests the educational spirit of Camerata Chicagoís founder and Music Director Drostan Hall. Maestro Hall has thirty years experience training aspiring young musicians. Many of the Academy’s members plan to study music at university and subsequently go on to have professional careers in music.

Double Bass soloist Lawrence Hall (17) is a Junior at Clapham School in Wheaton. He began playing the double bass at the age of nine when Jeanne Johannesen, the orchestra teacher at Washington School, introduced the instrument to him. Lawrence has been a member of the Camerata Chicago Academy since 2017 and plans to major in music at college. In addition to the bass he enjoys improvising at the piano, composing and attending Lyric Opera! 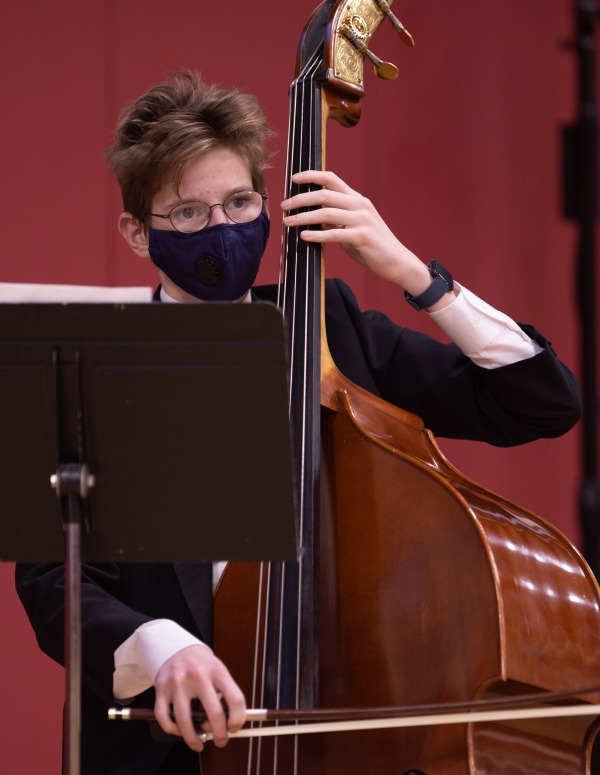 The Senior and Junior Academy orchestras were professionally recorded on December 18 as part of the Camerata Chicago Academy classroom learning program. This performance was recorded without an audience in place of an end of semester concert.